In the light of Quran the term Rizqan Kareem means "Most Excellent Sustenance" which are the rewards awaiting a true worshiper in the hereafter and in this world in the form of Allah’s love, closeness, faith and spirituality that He bestows on hearts of His servants. In classical Arabic, the term Rizq meaning "Sustenance" encompassing pretty much everything that benefits and sustains our society such as food, wealth, property, religious and worldly knowledge, wisdom, skills etc. While Kareem means "Excellent, Precious, Valuable". The Quran encourages one to spend our sustenance in the way of Allah so that He may bestow on us the Most Excellent Sustenance:

(Al Quran 8:2-4) Believers are only they whose hearts tremble with fear whenever God is mentioned, and whose faith is strengthened whenever His messages are conveyed to them; and who in their Sustainer place their trust -  those who are constant in prayer and spend on others out of what We provide for them as sustenance,  it is they, they who are truly believers! Theirs shall be great dignity in their Sustainer's sight, and forgiveness of sins, and a most excellent sustenance - (Asad Translation)

Knowledge internally strengthens us and makes our perception sharper so we make use of it to benefit ourselves and others. Hence this platform has been created to spend knowledge in the way of Allah ﷻ in the hope that we all can learn, make use of our learning and gain Rizqan Kareem - Most Excellent Sustenance. ​ 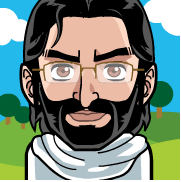 I personally carry a passion for researching, learning and writing on various Islamic topics. This is a platform to share my research based information gathered over the course of more than a decade. I hope and pray that your hearts and minds find comfort and solace after reading this content. If you feel you have learned something useful then all praise and gratefulness is due to Allah - the Sustainer of entire creation. If you find any mistakes then they are from me and may Allah ﷻ guide our hearts to what is correct.
Important Note For Readers

To keep up with Islamic Tradition when the word Allah ﷻ or Muhammad ﷺ, or anyone of the highly esteemed personalities; prophets and messengers including prophet Muhammad’s companions and renowned religious personalities are mentioned I have used honorifics beside their names. Few honorifics are in Arabic while others have been transliterated in roman letters and abbreviation:

Quran contains only the words of Allah ﷻ. In the Quran, a Surah is a ‘Chapter’ and an Ayah of a Surah is a ‘Verse within a chapter’. To refer to an Ayah within a Surah the number of the Surah is given first and then the number of Ayah within that Surah such as '3:91' where '3' is surah (chapter) and '91' is the ayah (verse). The Quran verses have mainly been taken from English translation called Message of the Quran by Muhammad Asad and others were taken from www.quran.com which lists English translations by renowned modern translators of Quran.

Hadith
​
Hadith (ahadith is plural) are words of Prophet Muhammad ﷺ and Sunnah are his actions. These both are a major sources of guidance in Islam and carry the same status as that of revelation but lesser than that of the Quran. Hadith e Qudsi meaning ‘Sacred Words’ are words of Allah ﷻ narrated to us by Prophet Muhammad ﷺ found in hadith literature and collections but are not part of the Quran. Both are quoted throughout this website where necessary. Majority of ahadith were taken from the website www.sunnah.com while some have been copied from works of Islamic scholars. Foot notes were added for definition of Islamic terms including citations to references where necessary.
All content on this website are copyrighted and owned by the author unless otherwise stated. ​Any reproduction of the content must acknowledge this website and the author and must not be edited or changed in anyway.
Follow Me on Social Media